A healthy Woman in the course of her reproductive life span could deliver 20 children.
In the US, Women have averaged less than 2 children since 1970.

Every Women should have the choice for life, liberty, and the pursuit of happiness:

Bloomberg Business Week
The Abortion Pill Is Safer Than Tylenol and Almost Impossible to Get
Almost 80% of adults, including two-thirds of women, don’t even know medication abortion exists, according to the Kaiser Family Foundation.
The New England Journal of Medicine Editorial:  Lawmakers v. The Scientific Realities of Human Reproduction

A fertilized egg can take a week before implantation. Only 50% reach that stage.
https://tinyurl.com/UCSFexplanation

Of the initial pregnancies, ~25% end in a miscarriage during the first trimester.
https://www.medicalnewstoday.com/articles/322634

~12% of pregnancies in the US are terminated when corrected for miscarriage. Most of those are in the first trimester and by Women who already have multiple children.

Of the US live births, 3% have serious birth defects detected and within 5 years 5%.

Women Deserve:
Life:         Currently overall US maternal mortality rate is 23.8 per 100,000 live births
Liberty:   The right to choose and bodily control with Family Planning
Pursuit    To Want and the Means to raise children
of Happiness:  If the state and society coerce women to carry to term unwanted pregnancies,
Then the state and society should bear the full cost of raising the children

The U.S. Census Bureau has released the official poverty measure and 2020 SPM from the Current Population Survey Annual Social and Economic Supplements. According to the official poverty measure, in the US 11.6 million children, 16% of all kids nationwide were living in poverty in2020. This total has increased by more than one million children since2019.

The data also reveal that poverty rates remain disproportionately high for children of color. Nationwide, Black (28%), American Indian (25%) and Latino (23%) kids are more likely to grow up poor when com­pared to their non-Hispanic white (10%) and Asian and Pacific Islander (9%) peers. http://tinyurl.com/US-Child-Poverty-Data

Without choice, Women with un-wanted pregnancies will be subject to undue hardship in seeking alternatives and many Women will die or become impaired for life.

In 1859 the U.S. Supreme Court in Ableman v. Booth upheld both the constitutionality of the Fugitive Slave Act and the supremacy of the federal government over state governments.

Which US states are expected to ban abortion?   and    Kaiser Family Foundation 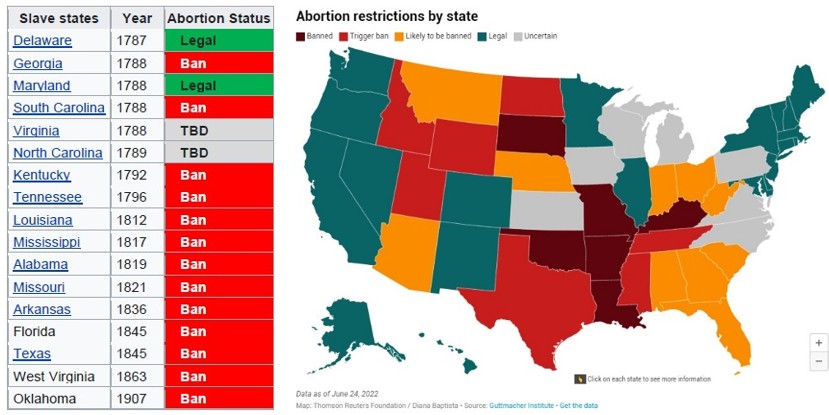 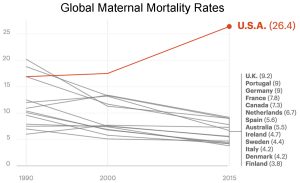 About the Supreme Court

Overall throughout its existence, the United States Supreme Court has been primarily a retrograde and repressive political entity aligned with oligarchy and supported slavery, Jim Crow Laws, business suppression of workers in favor of business and owner rights over all others. Once again the current Supreme Court is aligned with its historical character. Justices routinely obfuscate their political intentions with the pretense that they have insight into the original meaning intended by the writers of the United States Constitution which in fact has been amended many times.  The Justices pick and choose phrases to project the political outcome that suits their ideology.

It is clearly time to restructure and reform the United States Supreme Court to better serve We the People and better achieve the objectives clearly stated in the Constitution::

“We the People of the United States, in Order to form a more perfect Union, establish Justice, insure domestic Tranquility, provide for the common defense, promote the general Welfare, and secure the Blessings of Liberty to ourselves and our Posterity, do ordain and establish this Constitution for the United States of America.”

Article III of the Constitution establishes the federal judiciary.

Article III, Section I states that “The judicial Power of the United States, shall be vested in one Supreme Court, and in such inferior Courts as the Congress may from time to time ordain and establish.”

Although the Constitution establishes the Supreme Court, it permits Congress to decide how to organize it. Congress first exercised this power in the Judiciary Act of 1789. This Act created a Supreme Court with six justices. It also established the lower federal court system.

Over the years, various Acts of Congress have altered the number of seats on the Supreme Court, from a low of five to a high of 10. Shortly after the Civil War, the number of seats on the Court was fixed at nine. Today, there is one Chief Justice and eight Associate Justices of the United States Supreme Court. Like all federal judges, justices are appointed by the President and are confirmed by the Senate. They, typically, hold office for life. The salaries of the justices cannot be decreased during their term of office. These restrictions are meant to protect the independence of the judiciary from the political branches of government.

Article III, Section II of the Constitution establishes the jurisdiction (legal ability to hear a case) of the Supreme Court. The Court has original jurisdiction (a case is tried before the Court) over certain cases, e.g., suits between two or more states and/or cases involving ambassadors and other public ministers. The Court has appellate jurisdiction (the Court can hear the case on appeal) on almost any other case that involves a point of constitutional and/or federal law. Some examples include cases to which the United States is a party, cases involving Treaties, and cases involving ships on the high seas and navigable waterways (admiralty cases).

When exercising its appellate jurisdiction, the Court, with a few exceptions, does not have to hear a case. The Certiorari Act of 1925 gives the Court the discretion to decide whether or not to do so. In a petition for a writ of certiorari, a party asks the Court to review its case. The Supreme Court agrees to hear about 100-150 of the more than 7,000 cases that it is asked to review each year.

In the United States Constitution

(sources Wikipedia The US Bill of Rights)

In the United States, the Ninth Amendment to the U.S. Constitution protects against federal infringement of unenumerated rights. The text reads:

The enumeration in the Constitution, of certain rights, shall not be construed to deny or disparage others retained by the people.

The Supreme Court of the United States has also interpreted the Fourteenth Amendment to the U.S. Constitution to protect against state infringement of certain unenumerated rights including, among others, the right to send one’s children to private school and the right to marital privacy.

The Supreme Court has found that unenumerated rights include such important rights as the right to travel, the right to vote, and the right to keep personal matters private.[4]

The just-announced U.S. Supreme Court decision in Dobbs v. Jackson Women’s Health Organization represents a stunning reversal of precedent that inserts government into the personal lives and health care of Americans. Yet it was not unexpected. In the long, painful prelude to the decision, many states have severely limited access to reproductive health care. The fig-leaf justification behind these restrictions was that induced abortion was a dangerous procedure that required tighter regulation to protect the health of persons seeking that care. Facts belie this disingenuous rhetoric.1,2 The latest available U.S. data from the Centers for Disease Control and Prevention and the National Center for Health Statistics are that maternal mortality due to legal induced abortion is 0.41 per 100,000 procedures, as compared with the overall maternal mortality rate of 23.8 per 100,000 live births.3,4

Experience around the world has demonstrated that restricting access to legal abortion care does not substantially reduce the number of procedures, but it dramatically reduces the number of safe procedures, resulting in increased morbidity and mortality. Millions of persons in states lacking protections for abortion care are also likely to be denied access to medication-induced abortions. It may be difficult for many Americans in 2022 to fully appreciate how complicated, stressful, and expensive, if even attainable, their most private and intimate decisions will become, now that Roe has been struck down. A recent New York Times article recounted the experiences of women, now in their 60s and 70s, who sought abortions before Roe.5 They described humiliating circumstances, unsafe procedures literally performed in back alleys, and the deep shame and stigma they endured. Common complications of illegal procedures included injury to the reproductive tract requiring surgical repair, induction of infections resulting in infertility, systemic infections, organ failure, and death.6 We now seem destined to relearn those lessons at the expense of human lives.

Without federal protection, recent state laws curtailing or eliminating the right to abortion care will deny Americans’ reproductive autonomy and create an Orwellian dystopia. Examples are the Oklahoma law enacted on May 25, 2022, that declares life to begin at fertilization and the Texas bill that went into effect on September 1, 2021, which empowers third parties to bring civil suits and collect damages against persons who perform, aid, or abet abortions. Defendants in such suits will bear their legal costs, while plaintiffs are indemnified against countersuits for bringing groundless actions. Use of postcoital contraception, either hormonal contraception or placement of an intrauterine device, could be equated with abortion and prosecuted; some jurisdictions (e.g., Mississippi) are already considering such actions. A single act of coitus not timed with respect to the menstrual cycle has a 3% probability of causing conception.7 After conception, approximately 14 days elapse before chorionic gonadotropin reaches detectable levels in maternal blood. Approximately 30% of recognized pregnancies result in miscarriages. Thus, in some jurisdictions, people could be prosecuted for aborting a pregnancy by using post coital contraception, despite a 98% probability that their actions did not cause an abortion, but there is no way to prove or disprove that they were pregnant.

New laws in a post-Roe America declaring that life begins at conception may have additional ramifications. In vitro fertilization (IVF) did not exist before Roe. Since its development in 1978, use of IVF has grown, and 2% of all U.S. births now result from assisted reproductive technology, most commonly IVF.8 IVF procedures usually result in numerous oocytes ovulated per cycle, and fertilization frequently creates numerous embryos. Because modern IVF practice favors single-embryo transfers whenever possible, to reduce risks of multiple gestation and attendant complications, unused embryos are generally frozen for potential future transfer. Nationwide, there are tens of thousands of human embryos cryopreserved in IVF laboratories. While “adoption” programs exist to allow persons to donate their unused embryos to others who would like to implant them, many people are uncomfortable with this option, and unused embryos are often destroyed. If these embryos are declared human lives by the stroke of a governor’s pen, their destruction may be outlawed. What will be the fate of abandoned embryos, of the people who “abandon” them, and more broadly of IVF centers in these jurisdictions?

For nearly 50 years, Americans have lived under the protection of Roe v. Wade, free to determine their own reproductive destinies. At a time when dozens of other countries around the world are codifying protections for reproductive decision making for their citizens, we are turning the clock backward to take these rights away from our citizens. As has been pointed out by others,9-11 the most privileged members of U.S. society will always be able to work around restrictive laws and find abortion care in jurisdictions that permit it. Currently proposed changes in our laws will be most burdensome and unfair to the low-income persons and persons of color who are least able to overcome the impediments placed in their paths. These changes will inevitably exacerbate our already vast disparities in wealth and health.

One Reply to “United States Women Deserve Life, Liberty, and the Pursuit of Happiness”

This site uses Akismet to reduce spam. Learn how your comment data is processed.